Many of us take drinking water for granted, in Malawi it means the difference between life and death. The most important nutrient is a luxury item in one of the world's poorest countries. UNITY supports a well construction project to guarantee clean drinking water for orphans in Malawi.

Malawi is located in the southeastern part of Africa with a population of 17 million people. The main source of income is agriculture. The life expectancy is very low. Long periods of drought have an extreme impact on harvests. Every year, people starve to death because of poor harvests. Especially affected by the drought are mothers and their children, who cannot be sufficiently nourished. Insufficient nutrition at an early age limits physical and mental development; more than 40 percent of children in Malawi are affected by that. Since 1984, the community of Franciscan Sisters from Salzkotten has been living in Madisi, Malawi. Voluntarily it runs a primary school and a kindergarten with about 1580 orphans.

Polluted water increases the risk of infection and promotes diarrhea, especially in malnourished children. There is also an acute shortage of electricity. This is rationed slightly during the day, so that the waterworks are not able to pump the water far enough. The people of Madisi are particularly affected by the water emergency as the water tanks run dry. As the situation continues to worsen, an analysis of the wells in the surrounding area was made. The result was frightening: For the majority of children an access to drinking water is not guaranteed. The existing wells pump polluted and contaminated water. Since such a life situation is unacceptable, the sisters decided to become active themselves and to have new wells drilled. These are to be maintained over the long term through professional design and adapted to local conditions.

The first well was drilled in 2018 and there was even more water than expected! The water was completely clear through the gravel, and biological and chemical tests guarantee that it also has drinking water quality. The entire project involves the installation of a total of 20 wells in the neighboring villages. 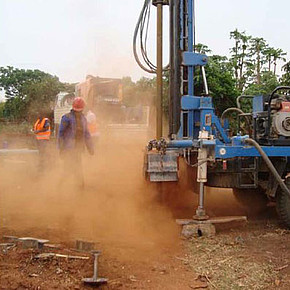 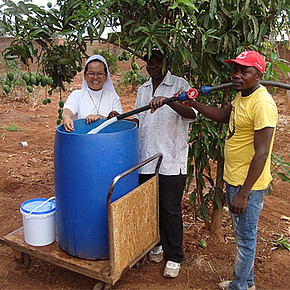